was born in 1907 in Reichenberg (Liberec) to the well situated family. From th 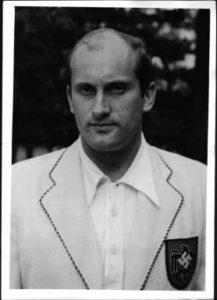 e beginning, he played tennis and football too – like a goalman. In his 16 years he finally decided to play tennis, and in 1925 he became junior champion of the Czech Republic. His career took a fast. Already in 1928 he qualified for the first time in the main competition at Wimbledon and in the same year he made his debut in the Davis Cup. After the departure of Jan Koželuh to professionals (1930), Menzel became for the long years our leader, practically until the beginning of the Second World War. He made a great honour to our tennis and moved it to the next step in the world. From his individual results should mention victory on the international championship of Germany in Hamburg in 1931, five times he had triumphed at the prestigious tournament in Cairo in 1935, fought his way into the final of tournament in Los Angeles, in which he lost with later the first holder of the Grand Slam Don Budge. Excellent results he achieved at Grand Slam tournaments. His rule was that reached the quartefinals at wimbledon in 1935,

Melbourne 1935. In the USA he has fought two times in the fourth round of the 1934,1935. The greatest successes he achieved in Paris. Here he played semi-finals in 1932 and even the finals in 1938. In the double is his greatest success the semi-finals of the 1937 Wimbledon with his Davis Cup teammates Ladislav Hecht. He was very successful in the Davis Cup. He got a total 84 games with balance 61 wins, 23 defeats. After the Munich Pact of four powers he had left Czechoslovakia in 1939 and represented in DC his new homeland of Germany. He spent the war as an editor of foreign radio broadcasts of the realm. After the war, he tried to return to the courts, but that was not it. So he could devote his two hobbies – travelling and literary activities. He toured Africa in particular Egypt, Australia, Pacific, India, Japan and China. All in time of today´s race almost untouched.He gave literature during his tennis career. He wrote poems, novels, the literature of fact, travelogues, books for children, biographies of German athletes, mostly fo

otball players and even the scientific literature. In 1983 he had a serious accident from whose consequences is never recovered. He died in 1987 in Munich.

You must know what your topic is, and what exactly you plan to show professional college essay writers to your viewers.