was the first Slovak tennis player, who was pushed into t 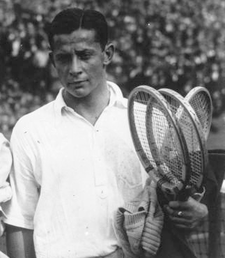 he European and world elite doizens. He was born in 31.8.1909 in Žilina. Professo Adamko brought him to sport at the Czechoslovak state grammar school. He began to play tennis in his 11 years in tennis books, especially playing on the wall. In 1931 on the recommendation of his well – known and, above all, the president Edvard Beneš, he moved to Prague for better training conditions. He trained and played in the 1.CLTK Prague and got a job in the office of the president on the club and CLTA Karel Robetin. The most commonly he practised with the only hopeful tennis player Jaroslav Drobný. Here was a lifelong friendship – Ladislav Hecht became a patron in the bed times after the Drobný emigration.Among his greatest successes include tennis victory in the doubles with Roderich Menzel at BUtler trophy i

n Monte Carlo in 1937. In the same year he fought his way into the semi-finals of Wimbledon. In the singles he ´d managed well at Grand Slam tournaments. At Wimbledon he fought in 1938 the quarter-finals, in 1934 and 1937 between the last 16. Between the top 16 players he got in 1934,1935 and 1938 at Rolland Garros and in 1941,1942 in Forest Hills. In 1932 he won 1. Makabiadu (the Olympics of Jewish) in Tel Aviv. He Represented Czechoslovakia in the Davis Cup in 1931-1938 and beat in it the famous players – Italian Di Stefano, English Benny Austin, Dan Ullrich or French Destremau. In 1931 thanks to him we got to the finals of the European part of this competition. In 1937 and 1938 he was in Europian Top Ten players and in 1941 he was in the world top ten. In 1938 he had to escape (as a Jewish) from the Czechoslovakia because of Nazis. He chose US New York, where he worked in a factory which made munition in a war time. After the war he founded his own factory, where he made paintbushes and other painting needs. Wimbledon organizers praised his credit on their tour